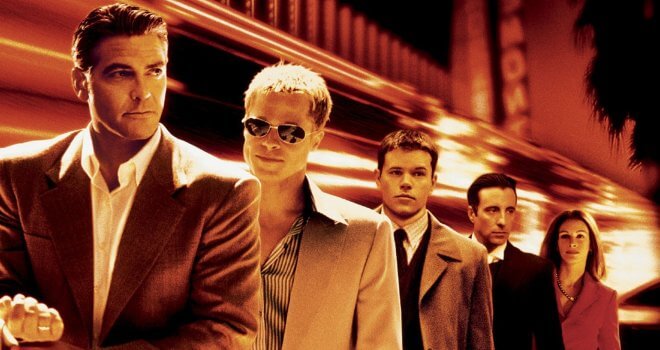 Ocean’s 11 is the remake to the 1960’s film with the same name that featured America’s rat pack. It was directed by Steven Soderbergh, produced by Jerry Weintraub and released by 20th Century Fox. A star studded cast feature in the film which is a crime heist story about an ex con who plans to pull of the biggest heist in the history of casinos.

Cast and Characters in Ocean’s 11

George Clooney was cast as Danny Ocean, the ex con who plans the heist. Brad Pitt played Rusty Ryan, an ex- partner of Danny and his good friend. Julia Roberts was cast as Tess Ocean, Danny’s ex-wife and love interest of Terry Benedict, played by Andy Garcia, who is the owner of the targeted casino.

Actors such as Mike Myers, Ewan McGregor and Bruce Willis were some of the stars that had been offered roles in Ocean’s 11 but due to other projects and budget reasons they had to decline the roles. Many other well-known stars made cameo appearances in the film including Wayne Newton; Siegfried and Roy; Lennox Lewis and director Steven Soderbergh himself who appeared on screen as a bank robber.

Three well known Las Vegas casinos come under fire as Danny Ocean, an ex-convict, decides to rob the Bellagio; MGM Grand and The Mirage all at the same time.  Ocean enlists the help of former friends and associates, each one a specialist in his respective field, and together they decide to rob the Bellagio on the same night a boxing match is held as the casino would have about $150 million in the vault.

With some of the crew scouting the casino for cracks in the security, Ocean builds an exact replica of the vault where they can practice getting the upper hand of the security systems. Upon learning that Tess, Ocean’s ex-wife, is involved with Bellagio owner Benedict, the team attempt to abort the mission but Ocean refuses over cricket betting.

On the night of the heist Basher Tarr activates an EMP device which switches off electricity to the Bellagio and allows the team undetected to access the vault. As the power is restored, Benedict receives a call where he is informed that his vault is being robbed and he must assist in loading money into a van or all of it will be destroyed. Benedict agrees but calls the police. When a SWAT team arrives, gunfire erupts in the vault, destroying most of the money.

When the SWAT team leaves, Benedict views the video footage and realises it had been pre-recorded scenes from a different vault and that the Ocean’s 11 team had been posing as the SWAT team.